It is raining feijoa it seems and wherever we look or go fruit is littering the ground!  We love them here; fresh, as jam, as chutney in baking…. you name it we will have a go.   Our own tree isn’t that great at producing big fruit however the kids always manage to find a feed when they are out playing.  Yesterday though, while visiting the Mother in Law the kids managed to collect several large bags from the place where she lives. 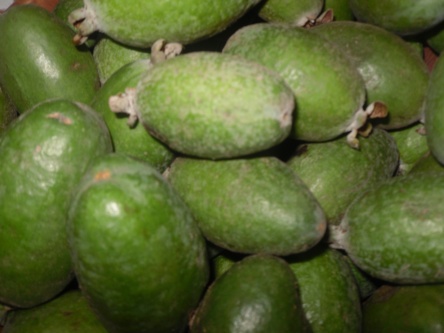 Feijoa, washed and ready to use.

So over the next 2 weeks at least…. maybe more depending on how many more people give us Feijoa…. I will share a few recipes that we use.  This week I thought I would share a Feijoa chutney recipe which I have adapted to use honey instead of sugar.  This yummy recipe comes from ‘Vegetariana’ by Susie Shaw and Wendy Baxter (which was a freebie with an magazine many moons ago and doesn’t seem available except on the link given for a Trade Me sale) so I’ll put down the original recipe and just add my honey modification in brackets.   Another point is they didn’t use the skins in their recipe whereas I do (waste not, want not) so my instructions are below rather than theirs.

Yum!! Feijoa Chutney for our stores

Until next week and another recipe …. man I’m on a roll at the moment!… I hope you are enjoying the fruits of your life.